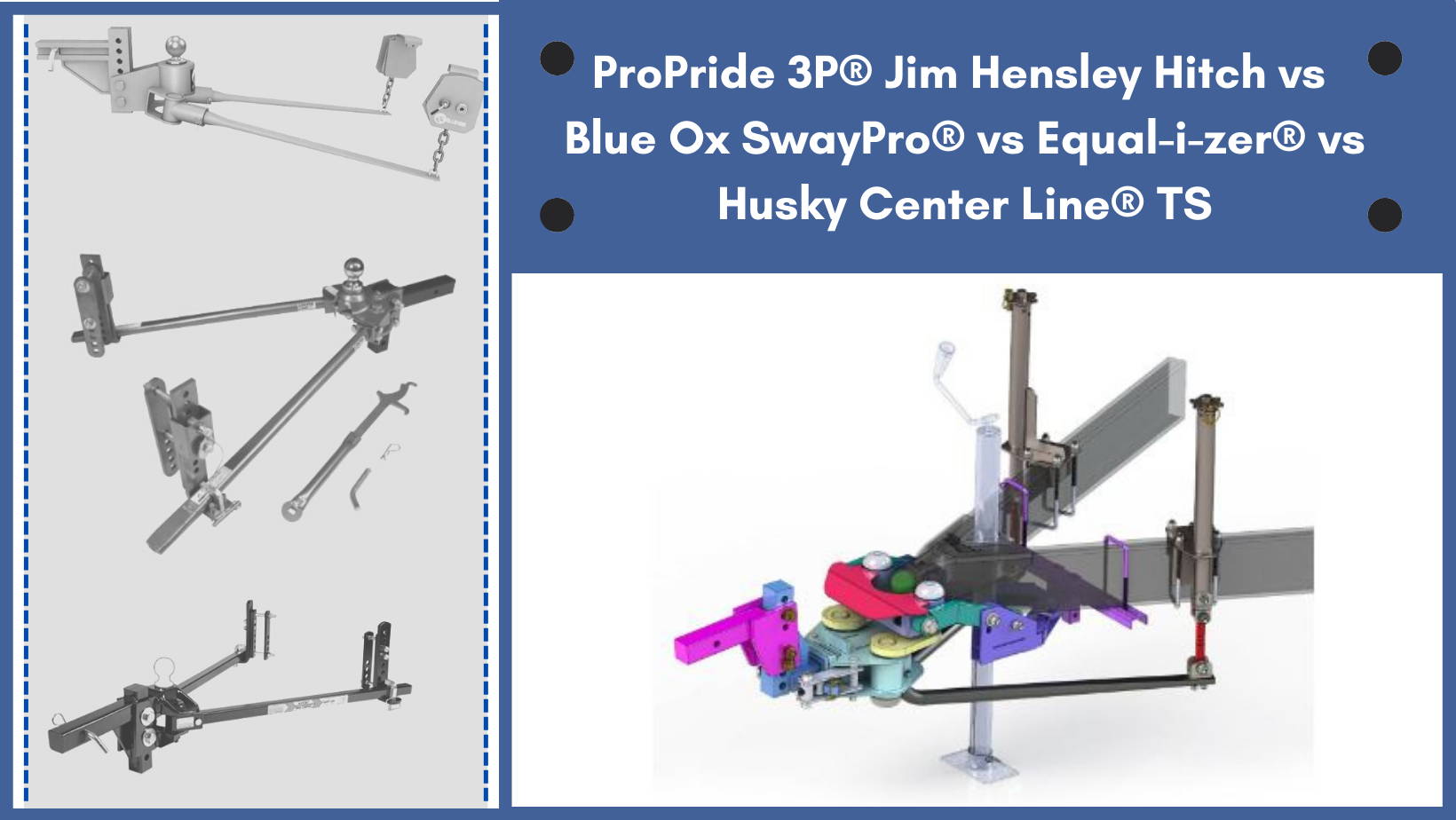 Controlling your trailer and driving your tow vehicle is a big deal. You must use the best equipment possible to ensure a safe and easy riding experience.

Weight distribution hitches, also known as sway-control hitches, balance the connection between the vehicle and the trailer. Installing a weight-distribution hitch is important, especially when towing large loads. It can mean the difference between a stressful journey and a relaxing ride. With the ProPride 3P® Jim Hensley Hitch, you can finally enjoy life on the road without worrying about heavy loads or losing control of your vehicle.

Although there is a wide range in price for weight distribution hitches, from a few hundred to several thousand dollars, it is important to learn more about the product before purchasing one. That is why we will go over some of the different types of weight distribution hitches available, their specifications, and what distinguishes ProPride 3P® Jim Hensley Hitch from the rest.

The Equal-i-zer® 4-point Sway Control Hitch is a weight-distribution hitch with trunnion bars that comes in many different tongue weight and gross trailer weight ratings. Users claim this weight-distributing hitch is simple to install though it will require some additional adjustment the first time or when switching trailers. The disadvantages are that it is louder than a chain-style equalizer hitch, it is slightly more expensive, and is a friction-based solution. 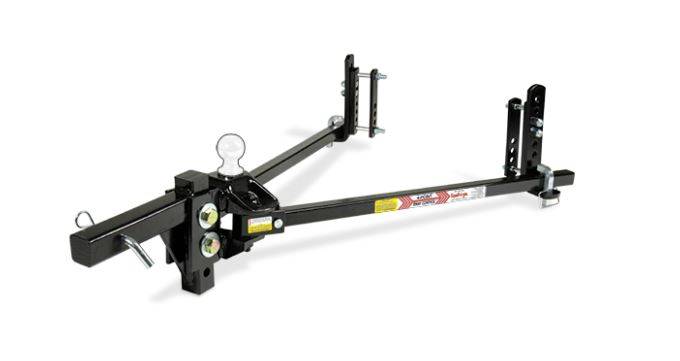 The  Blue Ox SwayPro® Hitch is a trunnion hitch with a tongue weight rating of 1,500 pounds and a gross tongue weight of 15,000 pounds. According to some users, it is nearly silent when in motion and comes with a pre-adjusted head that is ready to use. Some users complain that the sway bar chains are difficult to adjust. This weight-distributing hitch, like the Equal-i-zer®, is on the pricey side and is a friction-based solution too.

The Husky Center Line® TS has a very high tongue weight rating of 1,200 pounds and a gross tongue weight of 12,000 pounds. According to some users, it is quieter than any other similar kits. The common complaint from users is its weight, despite the fact that it is not significantly heavier than comparable hitches. It is also difficult to install and move when not hooked up to your vehicle. And just like the Equal-i-zer® and Blue Ox SwayPro®, it is a friction-based solution too. 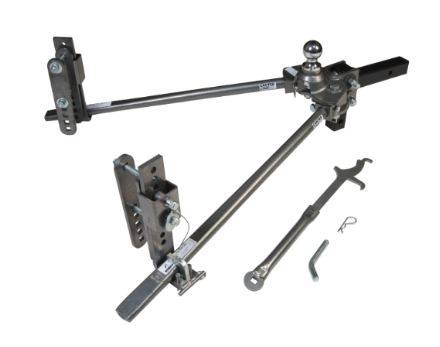 The ProPride 3P® Jim Hensley Hitch is by far the most improved, enhanced, and advanced trailer sway control hitch available for your extraordinary towing experience. 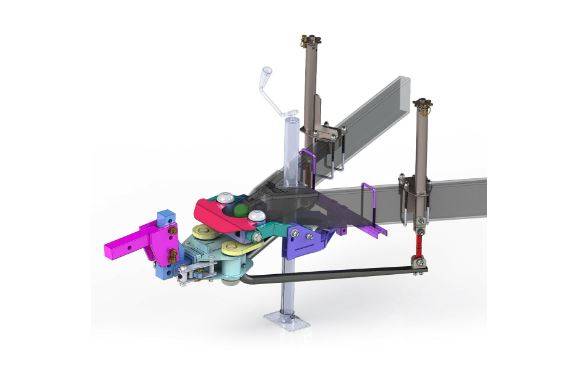 With easy installation and use you'll experience towing stability and safety unmatched by any hitch available. Its solid steel, durable design, and construction are built with the finest products available in the industry. It has incredible welding techniques that use four robotic welders doing four different things— the Main Unit, Yoke, Weight Distribution Jacks, and Adjustable Hitch Bar, at all times. The ProPride 3P® features the Pivot Point Projection (3P) technology that operates completely differently. Why is it different? The 3P hitch is attached to the coupler of the trailer. And by attaching the main head to the coupler of the trailer, we lock out the side to movement on the hitch ball. Any side forces on the trailer or any forces on the trailer that attempt to pivot the trailer at the coupler actually are projected forward. And because of our design, the effective point of the trailer is 52 inches forward of the ball. By locking out the side to side movement and projecting the pivot point forward to the rear axle of your tow vehicle, the 3P effectively causes your towing rig to act as a fifth wheel wood when influenced by outside forces. With the 3P technology, the towed combination becomes very solid and very stable.

If you use a friction-based solution, such as the Blue Ox SwayPro®, Equal-i-zer®, or Husky Center Line® TS, you will only dampen or reduce sway in certain situations, and you will have to slow down, limiting your vehicle's full towing capacity.

Why is it really best not to buy a friction-based solution?

Though friction-based solutions are less expensive, they do not solve the problem because they are simple mechanisms with fewer steel and moving parts.

Water is a lubricant, so is fine dust. As a result of normal use a friction based solution like the Blue Ox SwayPro® or Equal-i-zer® can have inconsistent amounts of friction applied under varying conditions.

A friction based solution sway control hitch will help some of the time, but you will still be a member of the white knuckle club.

Many ProPride 3P® hitch buyers previously owned a friction-based solution, and they wished they had started with a product that eliminates the problem, such as the ProPride 3P®.

To dampen the sway force, many hitches incorporate friction forces into their design. The difference between a ProPride 3P® Hitch and the other three hitches is simple and clear. Sway is eliminated by the ProPride 3P® Jim Hensley hitch. And here’s why.

If you want to let the hitch handle everything and keep the trailer stable for you, consider the Jim Hensley Hitch and expect no trailer sway, no longer braking distances, no poor handling, or unnecessary vehicle trouble with the ProPride 3P® Jim Hensley Hitch.

Make the right decision today and enjoy the safest and most secure towing experience available.